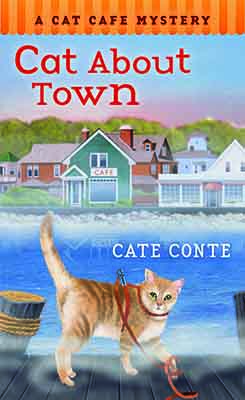 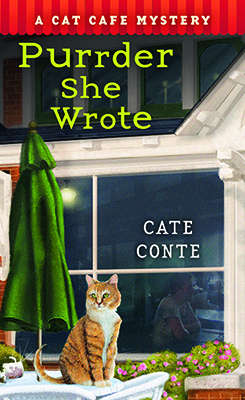 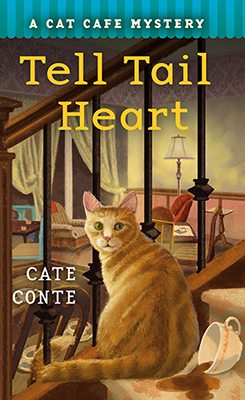 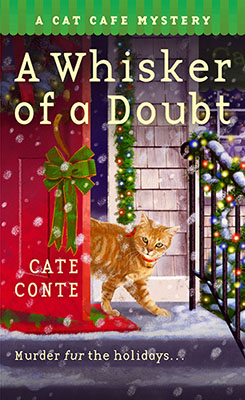 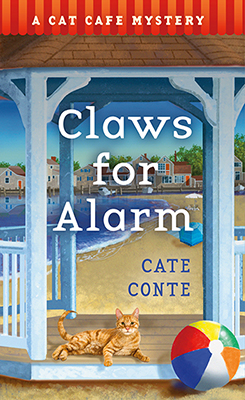 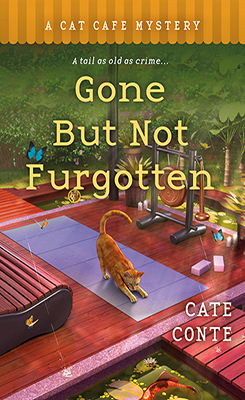 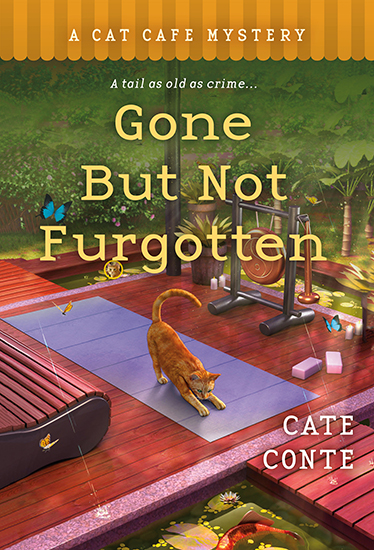 In Gone but Not Furgotten, the sixth in Cate Conte’s Cat Café beloved cozy mystery series, Daybreak Island has a killer on the loose… and this villain isn’t afraid to use their claws.

Maddie James has big plans for the summer season at JJ’s House of Purrs. But when her friend, master meditator and Tai Chi teacher Cass Hendricks, brings a potential animal hoarding situation to her attention, Maddie has to refocus her attention on the furry felines who may need a helping paw.

Cass has brought his Zen teachings to Fisherman’s Cove—a tiny, working class town on Daybreak Island—and one of his students, Laurel, has been on the receiving end more than one hissy fit from her neighbors, mostly because of her cats. When Maddie and Cass go to Laurel’s to check out the situation, not only do they find a plethora of cats in need, but also a dead body. Laurel appears to have had an unfortunate accident falling down her stairs, but Maddie gets a sneaking suspicion that something more sinister might be behind her death. When she voices her concerns, she’s horrified that it’s Cass who falls under suspicion.

With Grandpa Leo’s help, Maddie has to dig into the secrets this small community is keeping close to find out why Laurel really died before Cass is put behind bars… or the killer strikes again. 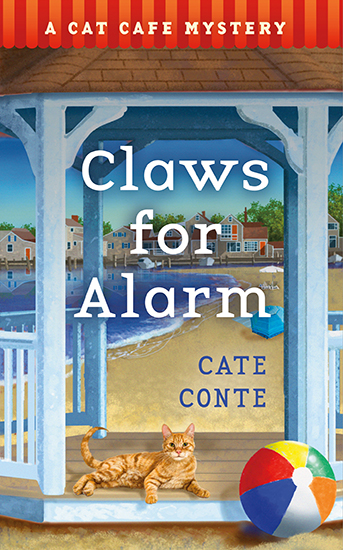 In Claws for Alarm, the fifth book in Cate Conte’s delightful and cat-filled series, it’s the heart of the busy season, and JJ’s House of Purrs is booming—until a killer is let off the leash.

Maddie James has finally given in to her friend Katrina’s pleas to open up her cat cafe to more than ten felines: they’re now up to fifteen purring friends. In fact, JJ’s House of Purrs is making such a splash that she’s getting national attention. The East Coast Animal Rescue League is quite interested in the cafe, and so Maddie accepts a request to meet with Jillian Allen, the executive director. Jillian shows up at the cafe and asks Maddie if they can partner on a fundraiser to support the local rescue efforts—and she offers up her celebrity endorser and her celebrity cat to sweeten the deal. Maddie, caught up in the prospect, offers up her sister Val to help plan the event.

But when Val shows up for a site visit at the venue, she finds Jillian strangled with a fancy cat leash—a piece of swag they were intending to use for the fundraiser—leaving Maddie with a lot of questions to answer. Was her death a tragic one-off event, or is there something more sinister going on? Maddie has to figure it out fast, before anyone else in the rescue community is jeopardized. 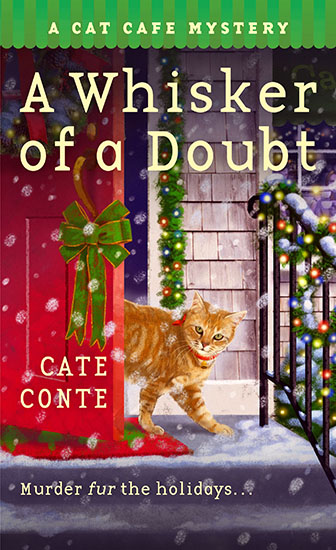 A Whisker of a Doubt

The fourth in the series, A Whisker of a Doubt is filled with felines and crime that’s purrrrfect for cat fanciers and mystery solvers alike!

Cat cafe owner Maddie James is trying to talk herself out of having a blue Christmas―relationship woes aren’t worth it, are they?―by throwing herself into work. The renovations on Grandpa Leo’s house-turned-cat-cafe are nearly complete, and she has a lot of organizing to do. Plus, she’s part of a volunteer contingency caring for a feral cat colony in one of the richest neighborhoods on the island. But not everyone has a soft spot for community cats, and lately things have been getting contentious between the neighbors and the volunteers.

Things take a turn for the worse when one of the residents, Virgil Proust, is found face-first in a snowbank after being bludgeoned with a Christmas gnome and Maddie’s rescue pal Katrina is blamed for the murder. Maddie doesn’t believe it, but to help her friend, she has to figure out who done it―before someone gets away with the purr-fect crime. 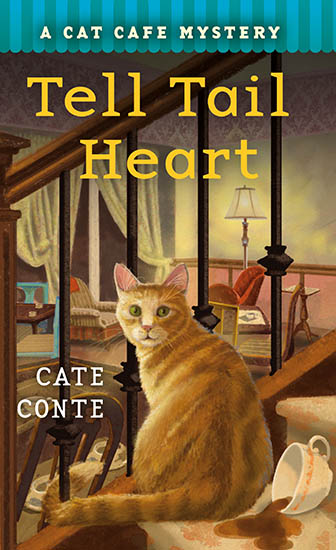 Welcome back to the charming New England coast, where Maddie James’s cat cafe is at risk of becoming a crime scene for the purrfect murder…

Maddie is hoping to have some downtime during Daybreak Island’s off-season to tackle her to-do list. Her grandfather’s house-turned-cat-cafe is under construction and she’s also scoping out places to open a juice bar on the island. On top of that, her relationship with adorable dog groomer Lucas has taken a pawsitive turn.

But easy is getting harder every day for Maddie, especially when a big-name writer who’s on the island working on a new project winds up floating in the canal. This, on the exact same day an eccentric woman shows up at the cafe claiming Maddie’s cat, JJ, is hers.

As the investigation into the dead writer picks up, Maddie realizes that even the neighbors she’s known all her life might be keeping secrets that go deep into the heart of this small seaside town. Meanwhile, a killer remains at-large… and on the prowl.

IndieboundAmazonBarnes & NobleKoboApple Books
“In a subgenre in which dialogue and character development typically take a back seat to ailurophilia, Conte’s cat cafe series is eminently readable and often immersive.”
—Kirkus Reviews
“This series is pure catnip for cat lovers!”
—Cozy Cat Reviews 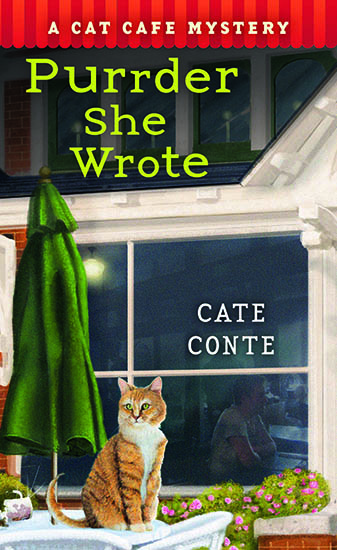 Purrder She Wrote is second in the pawsitively charming feline mystery series set off the New England coast, where curiosity leads to some killer small-town secrets…

It’s the grand opening of Daybreak Island’s cat cafe, where customers can get cozy with an assortment of friendly felines―and maybe even take one or a few home. Co-owner Maddie James is purring with excitement over her new warm-and-fuzzy venture… until she becomes entangled in a petty drama between one of her volunteers, an ardent animal-rights activist, and a wealthy woman who insists on adopting a calico kitty―right this instant. The catfight that ensues is bad enough for business. But when the snubbed socialite is found dead with a tell-tale catnip toy on the scene, suspicion lands squarely on Maddie’s staffer. Now, with her reputation and her career prospects on the line (to say nothing of her budding romance with a handsome pet groomer) Maddie must do whatever it takes to solve the crime―before her nine lives are up. 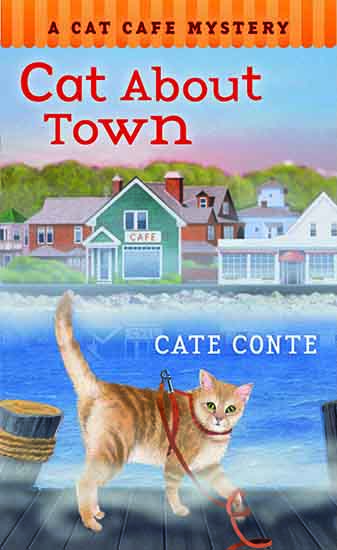 The first novel in a frisky new mystery series set in a small New England town, where an unlikely citizen is called in to solve the purrfect crime…

Maddie James has arrived in Daybreak Island, just off the coast of Massachusetts, eager to settle down and start her own business―and maybe even fall in love. When a stray orange tabby pounces into her life, she’s inspired to open a cat cafe. But little does Maddie know that she’s in for something a lot more catastrophic when her new furry companion finds the dead body of the town bully. Now all eyes are on Maddie: Who is this crazy cat-whisperer lady who’s come to town? If pet-hair-maintenance and crime-fighting weren’t keeping her busy enough, Maddie now has not one but two eligible bachelors who think she’s the cat’s pajamas… and will do anything to win her heart. But how can she even think about happily-ever-after while a killer remains on the loose―and on her path? Curl up with Cate Conte’s first Cat Cafe Mystery: Cat About Town!

“Like the best of its subgenre, Cat About Town achieves an intimacy of time, place, and people that immediately draws you in and makes you want to stay a while despite the inevitable crime(s) at hand. There’s an undeniable comfort to Cate Conte’s storytelling that will leave readers wanting—perhaps even kneading—more.“
—Criminal Element

“What could be more enticing for bibliophiles than the mixture of love and small-town intrigue that Cate Conte serves up in Cat About Town? Conte’s well-plotted novel with a host of likeable characters is a Valentine for any cat lover.”
—Best Friends Magazine