Learn to love the stories you tell yourself 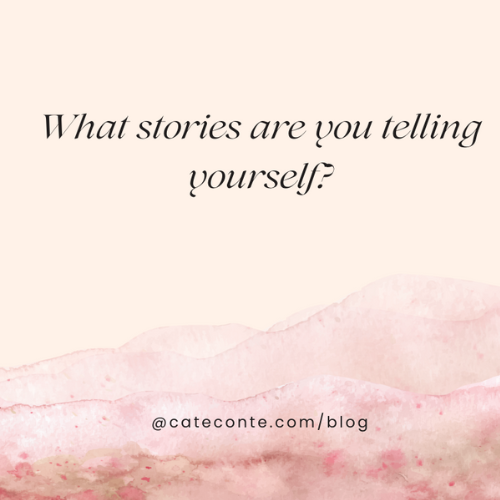 Most of us are carrying around stories that someone—a well-meaning family member or a friend whose opinion we really valued—told us at some point in our lives.

The thing about those stories, though, is that they probably aren’t true—like mine.

This is not a criticism of anyone’s family members or friends. People look at things through their own unique lens that has very little, if anything, to do with us and everything to do with them. It comes from THEIR stories, the ones that someone told them.

It’s not like people wake up and decided to tell awful things to their kids because they want them to have a terrible life. It’s about well-meaning parents or friends or relatives who just want to look out for you and protect you from the big, bad world and give you a dose of reality. They just want to prepare us for what they think is to come or what maybe they’ve experienced in their life.

But here’s the thing—these stories can be some of the biggest blocks to creativity.

These stories could be about anything, but it’s likely that in some way they are influencing your creativity. Because if you’re any kind of a creative person, usually the stories you’re hearing is about your art.

And usually people hear and perpetuate stories about artists and writers as “struggling.” Which is a terrible message to have handed down to you. If you listen to them long enough, if you start to believe in them, they will make you think about things differently, and likely steer you from the path to the joy and the life that you’re supposed to be living.

Even if you don’t believe the stories are true. I remember many times denying this idea that I was just a follower, especially to my mother’s face. Then I would go away and think about it, and the doubt crept in.

It’s so important to identify these stories and dispel them because they’re holding you back. Creativity is only one of the things that these stories can kill. They can ruin friendships, relationships, hold you back in your career. Even if it just started out as an offhand remark someone made, chances are—if you’re like me—you took it, repeated it, adapted it, expanded on it. And before you know it, it became a full-fledged belief.

And in order to get rid of those stories, we have to acknowledge them, understand what they are and where they came from, and ultimately, we have to honor them.

Because they’re showing you something you need to learn and overcome. And then we have to rewrite them, clear them out of our consciousness and make room for the things that we really want to do.

Here’s the process of how we do that.

First—get a journal. (You know I’m a journaling fool, so you had to expect that one.)

Next—understand this is a four-step process. You have to DO THE WORK. Ready? Let’s go:

1. Meditate. If you don’t know your story or stories, or even if you do, you want to sit with them and allow them to come to the surface. You can use a guided meditation, music, whatever your jam is. Then start to ask yourself, what, what are these stories? What is, what are the things that are holding me back? Where, where do they come from? And B really just let it come to you. And maybe you’ll even remember things that, you know, never really occurred to you as, as a story that you’re telling yourself or that you’ve carried with you for a long time.

2. Free write in your journal. Write down all the stories that you can think of, whether they came to you in meditation or whether they were ones that you already had in your mind before. And be really, really detailed. I like to bucket them. I start with everyone else’s stories—what’s the story, who told it, how it made me feel. Then I write down the stories I’ve told myself.

3. Now—pick the two worst stories. The ones you want to clear away the most. The ones that are keeping you from pursuing your dreams.

4. Still with me? Good! Now I want you to rewrite those stories.

And listen – you don’t have to do all this at once. You don’t have to just pick two. I want you to pick two to start, then keep going! There was a period of time where every day I spent five or 10 minutes in my journal in the morning rewriting something. And after awhile, they started to fade away.

Bonus step: Turn your new stories into positive mantras to remind yourself that you rock and you got this!

And before you know it, you’ll LOVE the stories you’re telling yourself.