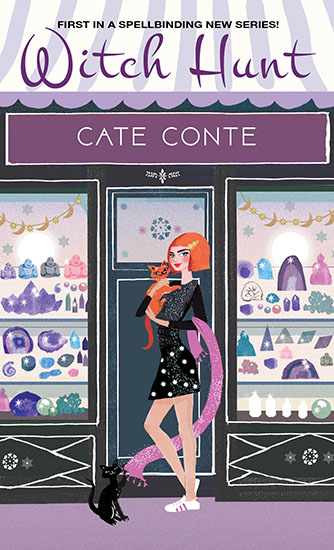 Violet Mooney is a 32-year-old witch—who has no idea she’s a witch. At least, until her life is turned upside down when a disagreeable town official is found dead, strangled with Violet’s favorite scarf, in the neighborhood courtyard. After the two had an argument in front of half the town. In the chaos that follows, Violet not only finds herself a suspect in a murder, but is also reunited with some long-lost family members, who have a big secret to share with her. They also have a job for her, if she’s willing.

In the days that follow, Violet has to clear her name in the mortal world—with no magical help—but also face the truth of her heritage, and accept that she has to assume a powerful role in a world she never even knew existed.

IndieboundAmazonBarnes & NobleKoboApple Books
“Zippy and fun, with an otherworldly hook that’s further enhanced by characters with a little magic of their own.”
—Kirkus Reviews

“A fascinating new para-witch cozy series! I loved the way this mystery felt like a magic carpet ride as I was swept away into Violet’s worlds…”
—Linda on Goodreads

“The author has crystallized the definition of enchantment with this spellbinding new series!”
—Lisa on Goodreads

Note: this is a private list—your email address will not be shared, and you can unsubscribe at any time.

We use cookies to ensure that we give you the best experience on our website. If you continue to use this site we will assume that you are happy with it.OK