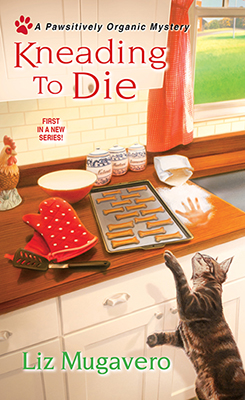 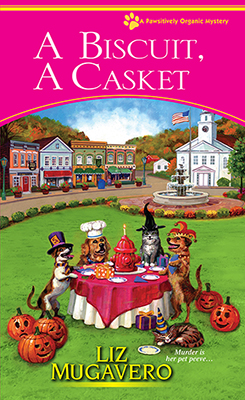 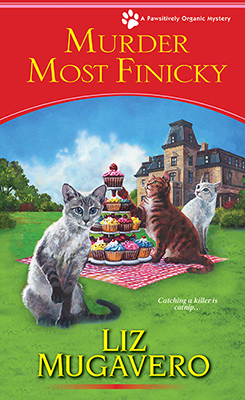 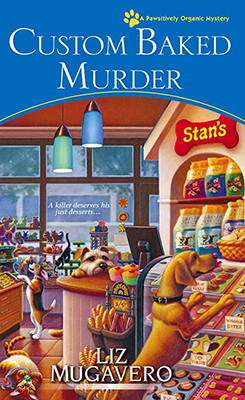 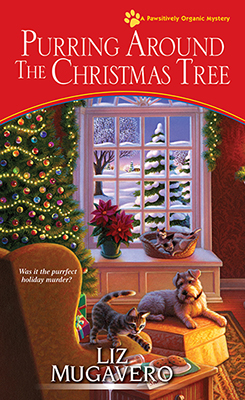 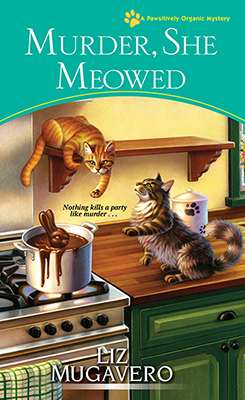 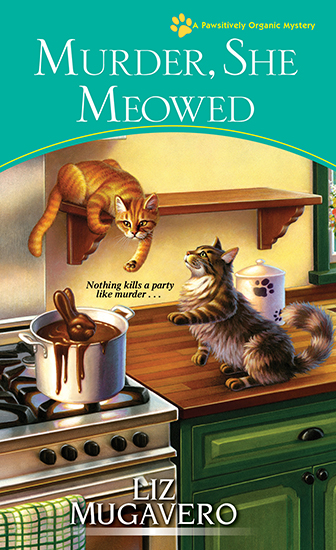 Kristan “Stan” Connor loves concocting tasty organic treats for dogs and cats—and she also loves her fiancé, pub owner Jake McGee. But she’s not so enthusiastic about finding a dead body at her own bachelorette party…

Stan and Jake’s wedding will soon take place on the town green in Frog Ledge, Connecticut, followed by a reception at their beloved Irish pub filled with friends, family, and their four favorite canine companions. Stan just has to endure the traditional girls’ night out first. Male strippers jumping out of gigantic cakes aren’t her preferred entertainment. But the hired hottie never gets around to taking it all off… because some-one takes him out first with one of Stan’s kitchen knives. A heartbroken Stan recognizes the victim as one of the delivery men from the local farm—who must have been moonlighting for some extra cash. Now the guest list has turned into a suspect list—and Stan’s making a vow to find the killer…

“Murder, She Meowed is another terrific addition to an entertaining and endearing series!”
—Cinnamon, Sugar and a Little Bit of Murder

“With cats, a relatable heroine and plenty of fun, cozy fans will enjoy this one.”
—Parkersburg News & Sentinel

“For anyone who loves cats or dogs and cozy mysteries, this series is a must read! The characters delight and the mystery is challenging to solve . . . I highly recommend Murder, She Meowed; whatever your day has been like, it will be much better with a visit to Frog Ledge.”
—Open Book Society 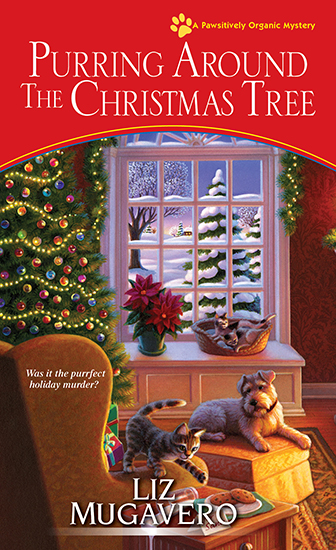 Purring Around the Christmas Tree

In the New England town of Frog’s Ledge, the Holiday Light Festival is a Christmas tradition. Killing Santa is not. To bring joy back to the season, organic pet patisserie owner Kristan “Stan” Connor will have to find another Santa before it’s too late…

To the townspeople’s delight, the annual lighting of the tree is a spectacular success. Unfortunately, Santa pulled up in his sleigh, DOA. At first Stan is sure it’s Seamus, her boyfriend’s uncle, inside the red suit. But the victim turns out to be an employee from the town’s Christmas tree farm. Rumor has it the deceased was a mean drunk with a soft spot for feral cats. Stan has no idea why he was dressed as St. Nick—or why he’s dead.

Meanwhile, Seamus, a jolly Irishman who comes to America every December to visit his pub-owner nephew, is nowhere to be found. Could he just be off on a Boston bar crawl? Or is something more sinister under the tree? Seamus was supposed to be dressing up and posing for pet pictures with Santa at the shop, but the dogs and cats might have to find another lap to curl up in if Stan doesn’t solve two mysteries soon. Or murder might be the only thing under the mistletoe this holiday… 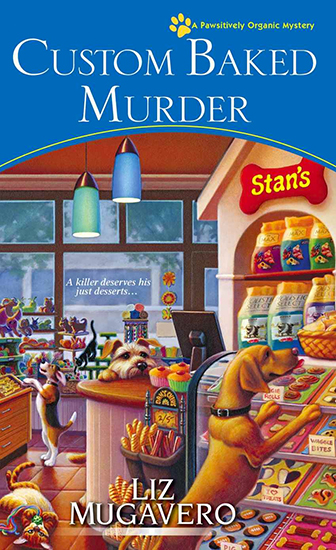 Kristan “Stan” Connor gladly turned tail on her high-flying job and moved to a quaint New England town to sell organic pet treats. But with her nose for solving murders, there’s no such thing as a quiet life…

Summer is winding down in Frog Ledge, Connecticut, but Stan’s love life and career are both heating up nicely. In between planning her new pet patisserie and café, Stan is settling into living-in-bliss with sexy pub owner Jake McGee. Love’s on the menu for Stan’s mom, Patricia, too, who’s engaged to Frog Ledge’s mayor, Tony Falco.

Mayor Falco’s dogged ambition isn’t popular among locals, but it’s his executive coach, Eleanor Chang, who’s inspired a dangerous grudge. When Eleanor is found dead, there’s a whole pack of suspects to choose from. Stan has first-hand experience of Eleanor’s unsavory business tactics. But finding out who forced her to take a fatal plunge off the corporate ladder means unearthing some shady secrets…and a killer who’s too close for comfort.

IndieboundAmazonBarnes & NobleKoboApple Books
“From the very beginning of the book, this fast-paced mystery is full of charming pets and an entertaining protagonist.”
—K.A. Davis on Goodreads 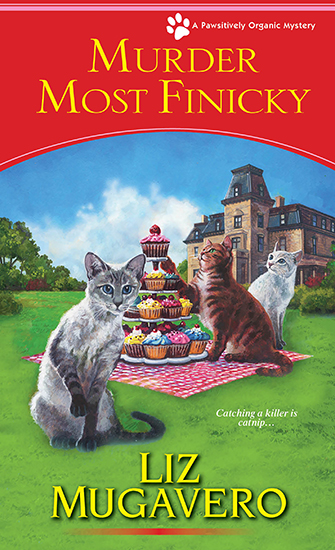 The dog days of summer have arrived in the small town of Frog Ledge, Connecticut, and business is booming for Kristan “Stan” Connor. Her Pawsitively Organic pet food has even caught the attention of celebrity pastry chef Sheldon Allyn, who helps Stan open a fancy pet pastry shop in Frog Ledge. A partnership is born, and Sheldon invites Stan to Newport, Rhode Island, for an appreciation weekend he’s hosting for all his independent chefs. But the gourmet getaway turns sour when one of the chefs turns up dead, and a second one goes missing…

As Stan tries to figure out who had a recipe for murder, the pool of suspects expands. And if she can’t sniff out the culprit soon, this killer may just serve up a second helping of murder… 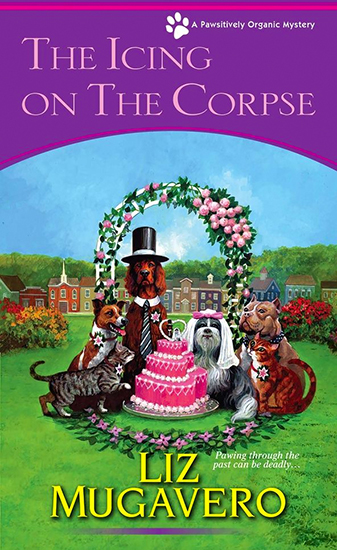 The Icing on the Corpse

Kristan “Stan” Connor is thrilled to be invited to the Groundhog Day festivities in quirky Frog Ledge, Connecticut. Her organic, home-baked pet treats are a big hit at the annual celebration, though an important guest is curiously absent…

When Helga Oliver, the town’s elderly historian, is found crumpled in the basement of the Historical Museum, the close-knit town is devastated. But after some tenacious digging, Stan discovers Helga was pushed down the stairs—and that this picture-perfect New England town may hide some dark secrets…

Stan’s dogged determination reveals Helga’s ties to an unsolved death in 1948… but how does that connect to Adrian Fox, who’s just arrived in town to shoot an episode of Celebrity Ghost Hunters? Stan is going to have to be very careful in chasing down the killer—if she wants to live to see another winter…

IndieboundAmazonBarnes & NobleKoboApple Books
“While this book will appeal to pet lovers the most, the characters and story will draw in any reader looking for a fun mystery.”
—Carstairs Considers 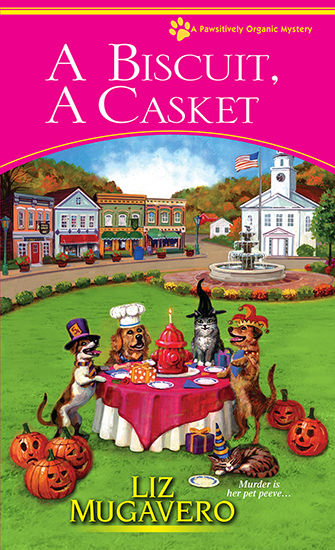 A Biscuit, A Casket

The small town of Frog Ledge, Connecticut, has wholeheartedly embraced Kristan “Stan” Connor’s new business—preparing quality organic treats for dogs and cats. On a healthy diet, the animals may live longer… but one local farmer won’t be so lucky.

As Halloween approaches, Stan is asked to cater a doggie costume party hosted by the Happy Cow Dairy Farm. Part of a local co-op, Happy Cow specializes in organic dairy products, and farmers Hal and Emmalee Hoffman have started opening up the farm for parties, offering a “haunted” corn maze as an added attraction.

When Hal’s lifeless body is found in the maze, the police at first suspect his wife, but Stan soon learns the dairy farmer had plenty of enemies—from bitter family members to shady business associates. If Stan can’t extract a kernel of truth from the labyrinth of lies, she may be the next one to buy the farm…

IndieboundAmazonBarnes & NobleKoboApple Books
“I enjoyed A Biscuit, A Casket from beginning to end. Such a fun well-written mystery that you can’t help but love.”
—Books-n-Kisses
“Mugavero does an excellent job of weaving the varied lives of a large cast of small-town characters together to create a coherent and thrilling mystery with a heart.”
—Back Porchervations 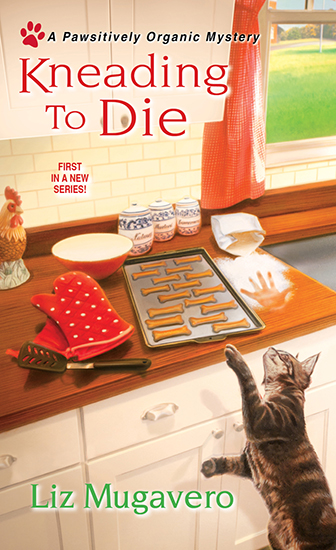 Maybe the best thing that ever happened to Kristan “Stan” Connor was losing her high-stress public relations job. Now there’s plenty of time to spend in her sleepy new Connecticut town working on her dream: baking healthy, organic pet treats!

Before long the neighborhood dogs are escaping their yards to show up at Stan’s doorstep, begging for the kinds of special homemade treats her Maine coon cat Nutty loves so much. And Stan’s pet-loving neighbors are thrilled with the new organic options available to their furry family members. But not everyone loves Stan and her new-fangled organic ways…

It seems Carole Morganwick, the town vet, is from the old school of pet care. But when Stan swallows her pride and brings a very unwilling Nutty in for a checkup, she not only finds Carole dead under a pile of kibble… but also that she’s in the dog house as the prime suspect! Finding the real killer and clearing her name will require some seriously surreptitious sniffing around… and hopefully, curiosity won’t kill this innocent cat!

IndieboundAmazonBarnes & NobleKoboApple Books
“Like the goodies Stan makes for her Maine coon kitty Nutty, Kneading To Die is a treat! Liz Mugavero weaves animal knowledge into a fun and frisky whodunit, with plenty of lively pet action.”
—Clea Simon, author of Cats Can’t Shoot
“Animal lovers and foodies will hunger for more of this yummy new series.”
—Avery Aames